AFL: The Centre of Sports in Melbourne

If you live in Australia, you have probably heard of AFL several times. But if you’re a visitor, then you may not be aware what it’s all about. 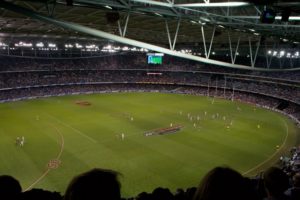 This is a physical contact sport which is also known as “footy” or “Aussie Rules”. This style of football is able to be traced to early styles of Gaelic football and Rugby. It is, however, unique to Australia and certainly the most popular sport in Melbourne. In 1958 the games rules were codified, they probably existed way before any other, more modern form of football. The now multi-million dollar business competes nationally as well as in smaller leagues. Generally, in Australia, the interest in this sport is consistently high during the season. There are however areas in Australia that do not warmly support the game and it has not become internationally well known.
The Australian Football League (AFL) is based primarily in Melbourne where the biggest tournament is played leading up the Grand Final which is played at the MCG stadium.

Where is Aussie Rules Football Played?

Australia is made up of six states and two territories. In Victoria, South Australia, the Northern Territory, Western Australia, Tasmania Aussie Rules is the main football code, there is a strong following in the Australian Capital Territory. It is played in New South Wales as well as Queensland but it comes in second place in popularity after Rugby League. Financial as well as practical assistance is provided by the AFL to leagues in Canada, Japan, Britain, Denmark and New Zealand. Most of the famous and popular teams and clubs are based in Melbourne, Victoria. 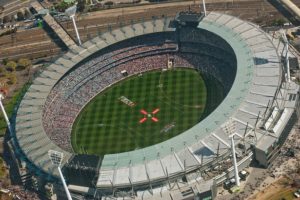 The game is made up of four quarters, twenty minutes each. If the play is delayed for some reason then time is added onto the quarter in question, this will be referred to as “time on”. Between the first and second quarters, in order for the teams to change ends, a maximum interval of three minutes is provided. This is done at the end of each quarter.

At halftime no more than twenty minutes of an interval are provided, players are allowed to leave the grounds for no more than fifteen minutes. Between the third and fourth quarters, an interval of no more than five minutes is allowed. The team with the highest score wins the game, if the points are equal, it is a drawn match.

Many a similar game has emerged from this Australian sport, the variations of contact have been made as a way of encouraging more participation. Many times players that are outside of Australia take part in similar games which are adapted to the available fields. This is a fun game which inspires teamwork, strength, and endurance, it is a game which brings not only the players together but the thousands upon thousands of faithful fans, most of which who would never miss their favorite team’s games.