Pop-up Ads: Does Google Hate Them?

The internet as we know it today wasn’t always the way it is. Advertisers saw the potential reach of the internet back in the early 90s and started using it aggressively to advance their marketing goals. And the pursuit of capturing the internet user’s undivided attention resulted in the creation of the revolutionary pop-up ad. Today we’ll be discussing how pop-up ads were invented and why Google has come to severely penalize websites that use them. 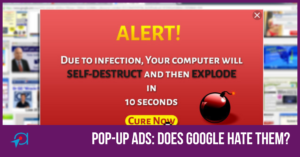 First, let’s talk about where pop-up Ads came from and their history…

Back in the early 90s, there were less than 4 million internet users in the entire world. But the internet was gaining popularity at a swift pace and by 1995 the total number had grown to 16 million people. This rapid growth was something that marketers and advertisers could no longer ignore and soon the world of online advertising was born.

The first online ads were nothing more than images with some marketing text in them. These are now more commonly referred to as banner ads.

By the late 90s, online advertising was commonplace and advertisers were working hard at finding new ways of getting the internet user’s attention. But there was a problem. Advertising technology was still in its infancy and that led to online ads being placed on random websites. As one car company found out when they realized that their ads were being served on an adult website, which they believed would negatively affect the reputation of their brand. Thus, online advertisers had to find a way of disassociating the ad from the website they were being served on. This effort indirectly led to the invention of the pop-up ad.

Ethan Zuckerman, the inventor of the pop-up ad, designed it to cover a part of the website’s content underneath it. The pop-up ad had its own design so it stood out from the website it was being served on. This created a strong disconnect between the website and the ad itself and so the reputation of the brand being advertised would stay intact (in theory), while ads could still be served freely on any kind of website.

The pop-up ad proved to be a hugely popular way of advertising online. By 1997, popular websites such as AOL and the New York Times were pushing advertising through pop-ups.

This popularity was one of the major reasons for the pop-up ad’s demise. It was being overused, and that led to people being frustrated because of the way it hindered access to a website’s content. A study conducted in 2004 found that 95% of internet users reacted negatively to pop-up ads.

Pop-up ads work through the use of web page scripts (predominantly JavaScript) that allow them to jump in front of the website’s content. Pop-ups may appear as separate windows or as part of the web page, obscuring the content of the web page being accessed, to instantly catch the attention of the visitor. Want to find out what Google thinks of your website? Get a free SEO report here!

Pop-up ads are designed to deliver “in your face” advertising. They’re something that cannot be missed and usually needs to be closed. Because the pop-up is guaranteed to get at least one click (meant to close it), it can be misused to instead redirect that click to another website. This is why most people find pop-up ads to be a deceptive or misleading form of advertising. In worst case scenarios, pop-up ads have been known to run malicious scripts designed to collect sensitive data or install spyware.

What Google Thinks of Pop-Up Ads

As annoying as pop-up ads were, they were never really on Google’s radar and as such the search results of a website with pop-up ads weren’t affected. According to our Search Engine Optimisation specialists, that quickly changed as smartphones gained popularity and a bulk of searches started to come from mobile devices.

From 2015 onwards, Google started implementing some new search engine measures that favored websites providing good mobile user experiences. The first of these measures was the mobile update which was announced in the autumn of 2014 and rolled out on April 21st, 2015. This update included search results which showed a “Mobile-friendly” label for websites that had been optimized for mobile devices.

The push for better mobile user experiences led to Google penalizing websites that showed intrusive pop-up ads (or interstitials, as the company calls them) in early 2017. According to Google, an intrusive pop-up is anything that takes unreasonable amounts of screen real estate and generally impedes the user’s access to a website’s main content. The following are clear examples given by Google of pop-ups it deems to be intrusive: 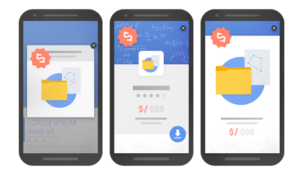 This, however, shouldn’t be confused as a blanket ban on the use of pop-ups, for advertising or otherwise. Google just wants to discourage the use of intrusive pop-up ads that lead to a sub-par mobile user experience. The company has set clear guidelines for the types of pop-ups/interstitials that will not cause penalties for websites: 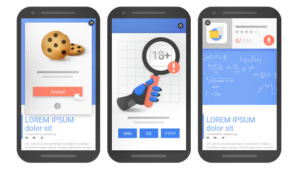 Examples of pop-ups/interstitials that are permissible according to Google

The Reasons Behind Google’s Dislike for Pop-Ups

Smartphones have limited screen real estate due to small physical display sizes. A pop-up ad can potentially take up all of the screen’s available space, thus forcing the user to either dismiss or follow through on what the Ad wants. This leads to frustrated users and a bad mobile experience in general.

The pop-up was invented to create a strong disassociation between ads and the websites they were being served on. Needless to say, this clearly hints at the fact that pop-ups rarely deliver content that is relevant to the website’s visitors. Not only that, but they’re also frustrating to encounter as they hinder access to what the user is really there for – the website’s content.

Pop-ups have been designed to grab a user’s attention whether they like it or not. Pop-ups that are displayed successfully will always be able to show their content to the user. This has given advertisers the opportunity to include ‘click-bait’ content that is designed to get the most amounts of clicks. The focus here is not on the quality or relevance of the ad, just the number of clicks it can get from visitors.

Pop-up ads can have a direct impact on the overall success of the SEO strategy of a website, even when Google’s penalties are not taken into account. We have seen this happen first-hand at A.P. Web Solutions.  The following factors should be considered when implementing pop-up ads on a website:

The timing of a pop-up ad can often decide whether it’s going to be considered as intrusive and frustrating by the user. Pop-ups that are displayed immediately after a webpage is accessed, are deemed intrusive by both Google and most internet users.

As such, it is advisable to display such pop-ups after the user has browsed a certain length of content on the page. Ideally, pop-ups should be displayed when the user has reached the end of the content and is likely to leave the page. If the user likes the content, they’re more likely to click on the pop-up and not leave with a bad impression of the website. If you want to consider hiring professionals to do the job for you, learn more about SEO pricing here.

A pop-up should be easily dismissible by the user. This can include a clear “X” mark at the corner of the pop-up or a button which closes the pop-up ad. Considerations should be made to close the pop-up if the user clicks outside of the pop-up (this shows intent to access content).

The pop-up ad has revolutionized the way online advertising is delivered to web users. However, user response to this has been overwhelmingly negative. That is why most modern web browsers now include built-in pop-up blockers. But the pop-up ad is not going to disappear any time soon – it still remains a reliable way of capturing the attention of a website’s visitors.